If you visit a farmers market in south Snohomish County and stop by a booth called Egg Song Farm, there’s a chance you may see a bin of writhing, live insects called mealworms. If you’re brave enough, we’ll even invite you to put your hands in the mealie bin and let the harmless critters provide a sensory experience unlike any other! Mealworms aren’t slimy and they don’t bite, and in fact, they’re not even worms at all.

Mealworms are often farmed by poultry keepers because they provide a healthy, tasty protein supplement for our egg-laying friends. They are the larval stage of the insect life cycle for the darkling beetle, and they also provide extra dietary nutrition to reptiles, sugar gliders, hedgehogs, and other exotic pets. Mealworms are easy to farm and thrive in a variety of environmental conditions, although they prefer a dark, tropical environment of warmth and humidity in order to grow at the optimal rate. As larvae, mealworms prefer to live in a substrate of milled grain, such as wheat bran, cornmeal, or oatmeal, hence the name “mealworm”!

As an adult, one female darkling beetle can lay up to 500 eggs in her lifetime. The beetles are prolific egg-layers, and it doesn’t take a very large colony of adults to produce an explosion of tens of thousands of mealworms to feed to your chickens as treats. It does, however, require a little bit of time and patience to allow your farm to get growing, as all farming endeavors do. Beetle eggs are tiny, microscopic really, and if you provide a deep plastic tray or bin with wheat bran filled one to two inches deep, they will burrow down and lay their eggs throughout their food substrate. Then, there’s no risk of them crawling up the sides of the bin to escape. It is impossible to see the eggs and separate them from the bran, so every couple of weeks it is recommended to sift the beetles out of the substrate, place them in a fresh bin of milled grain, and set the egg-laden wheat bran bin aside to allow the thousands of tiny eggs to hatch out into larvae.

It takes anywhere from four to eight weeks to be able to see the hatching mealworms with your naked eye, but if you swirl the wheat bran around with your hand and then look closely for a few moments, you will see the substrate moving as though experiencing a tiny earthquake! If your mealworms are being kept in ideal conditions at around 80 degrees and approximately 65% humidity, they will reach a nice plump size at about three to four months of age. Even if they aren’t kept that warm, they will grow just a bit more slowly and be ready to harvest closer to five or six months.

Humidity can be adjusted in individual bins using a piece of starchy vegetable to account for adding moisture in dry climates. Mealworms don’t drink water, rather, they stay hydrated by munching on pieces of carrots, potatoes, banana peels, celery, etc. You can even keep your mealies hydrated simply by spritzing water on the surface of the wheat bran while they’re super tiny so that you don’t waste food pieces that go uneaten, eventually shriveling up and drying out. 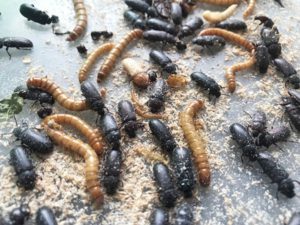 In order to keep the insect life cycle going, you must set aside a percentage of your larvae and allow them to pupate. The pupa stage is basically that of a cocoon and lasts around seven to ten days while the mealworm transforms, eventually emerging as an adult darkling beetle. Beetles are white when they first emerge, then slowly turn brown and then black over the course of a couple of days while their exoskeletons harden. When the beetles are about two weeks old, they reach sexual maturity and begin mating and laying eggs in their food substrate. Adult beetles can live approximately six to nine months, making the complete life cycle for approximately one year. When beetles die, I pick them out and toss them to the chickens who happily scarf them down. Most poultry are happy to eat mealworms at any stage of their life cycle, dead or alive, so there really isn’t any waste when farming these insects for your birds!

Speaking of waste, mealworm droppings are called frass and they sure do produce an abundance of it. Frass has a sandy-like texture and can be used as a fertilizer in your garden. It’s simple to sift the frass out of a bin of mature mealworms by using a basic kitchen strainer, and it can be easily sprinkled on the topsoil of all your garden plants or mixed in with some water to make a compost tea.

Perhaps you’ve heard stories about opening a box of cereal only to find it crawling with mealworms? Sure, it happens, but really mealworms are quite harmless even though they are a grain pest, and in fact, they are farmed for human consumption and used as a primary protein in many countries around the world; they are quite delicious when cooked and prepared with seasons and spices. The humane way to euthanize mealworms is to place them in the freezer for several hours where they will go dormant and eventually die. Upon removing them from the freezer, wash them in water and then toss them into a hot frying pan with some olive oil, add some salt and pepper, cook them until they’re crispy, and then garnish your favorite salad with a nutty-flavored protein!

Not ready to try mealworm salad yet? Don’t worry, your chickens are ready to devour them for you. Dried grubs are always a great treat option for your flock, but if you want to try an interesting and fun hobby that will eventually allow you to produce a sustainable supply of healthy, live snacks for your favorite insect-eating friends at a very low cost, I highly recommend giving mealworm farming a try!

Huge thanks for this guest post from Holly Winters of Egg Song Farm!