How to Safely Introduce A Pet Dog To Your Chickens 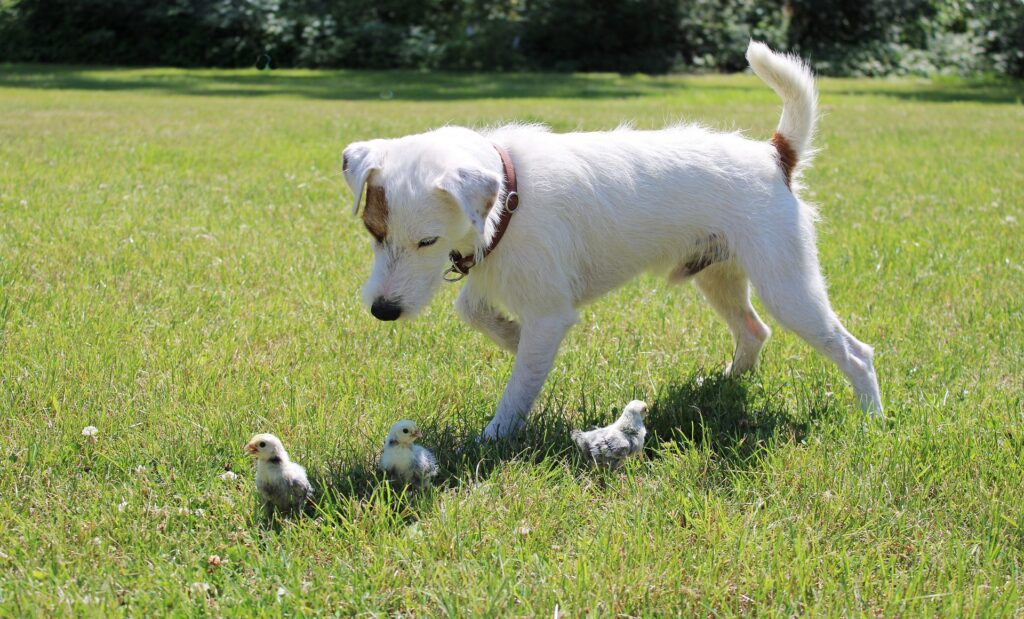 You’ve adopted chickens and you’re worried how your dog might react to the chickens. No need to fear because dogs and chickens can get along just fine, and this guide will show you just how to introduce them.

Maybe you’re the keeper of a flock of chickens at home and you want to keep them safe from predators. Or maybe you’re introducing a new dog to the home or bringing in the chickens when you already have a dog. Whatever the case you might be thinking about how to introduce the chickens and dog to each other.

The first thing you should know is that chickens and dogs can get along and even become friends. But there is a process to forming this relationship and you can’t always expect them to just get along from the start. Some breeds are actually even better suited to have around chickens than others because they might be more tolerant or have less of a prey drive.

But because your dog is not one of the best doesn’t mean that it can never be around the chickens. This step-by-step guide will show you just how you should introduce any type of dog.

Are Dogs Ok With Chickens?

A dog that has never met a chicken before will naturally be curious about it. Some dogs might circle and sniff around the chickens. Others might try to play with them and bark. And a few might try to chase them. How a dog responds to a chicken will vary greatly by breed and your pup’s personality. If at any point it becomes apparent your dog will not get along with your chickens or attempts to attack them, separate them, and seek the help of a licensed dog trainer for further training.

After this initial phase after trying to figure out the chickens, a small and playful dog might consider them as new playmates while a large hyperactive dog might want to go after them all day because of its high prey drive.

But in general, a dog won’t attack your chickens if it is properly trained. For a dog with a high prey drive, they might just need a bit of more work with obedience training. But that doesn’t mean that it can never be friends with the chickens.

The key to having your chickens and dog getting along is that your dog is properly socialized and trained. But there are many other steps you should follow when first presenting your dog to the chickens before you allow them to interact without a boundary between them.

How To Introduce a Dog to Chickens

1. Set Boundaries in the Yard

Both chickens and dogs need a place to call their own. If you introduce new chickens to your yard, your dog might think they are invading its territory.

Dogs naturally seek for a ‘den’ or place that they feel like they can be safe. If your dog is wary about the chickens, it will especially need this place where it can hide and feel at peace. If your dog is nervous around chickens it might want to try to avoid going out to the yard all together. But your dog doesn’t have to fear going out when there are chickens around.

By enclosing the chickens in their own coop area, you help ensure the chickens have a safe place to rest while allowing the dog to roam freely on its side of the yard. If the chickens can have an area where they are out of sight from the dog, this might even be helpful.

You can also keep a dog house outside in the yard for your dog. If your dog is meant to watch the chickens all day it can do so from the comfort of its own little shelter. But if it  needs to hide from the chickens or just ignore them, this can be a quick getaway for it.

2. Start with One Chicken at a Time

If you have a small flock of chickens, you don’t want to show your dog the whole flock at once. This could be overwhelming for it or incite unwanted excitement leading to lots of barking and chickens flapping around and clucking in fear.

Make sure that you keep your dog on a leash when first introducing it to the chicken. If your dog does get super excited to see the chicken, keeping it on a leash will stop it from chasing the chicken around the whole yard.

3. Use Positive Reinforcement and Basic Commands

It’s important that when you want to start introducing your dog to chickens it at least knows basic commands like ‘sit’, ‘stay’ and ‘lay down.’ If you have a puppy, make sure to start early and allow for socialization time not just with other dogs but also with the chickens. This way it will grow up being adjusted to the chickens and will treat them as normal members of the home.

When your dog behaves just the way you want it around the chickens, give it positive feedback. If it doesn’t bark or cower away you can praise it and give it a treat. Give it lots of pets and tell it things like ‘yes’ or ‘good dog.’ This positive reinforcement is essential for your dog as it will learn that by being calm around the chickens it will get rewarded.

If you observe unwanted behavior, do not harshly reprimand your dog. Just separate it from the chickens and don’t reward it. Many dogs are people pleasers and will try to do anything to make you happy and get a reward. It might take some time, but eventually your dog will learn the kind of behavior you want to see so that it can get its treat and praise.

4. Be Patient and Repeat

Perhaps the first time you introduce your dog to your chicken it doesn’t go as planned. And that’s okay. Not every dog will learn to respect the chickens on the first try. Just take your time.

Having high reward treats can help your dog focus on you and increase your chances of success! Treats like cheese and bacon can be a game changer for some dogs.

Dogs with a high prey drive might especially need a little more time adjusting to a yard with chickens. They just can’t help chasing anything that moves, but with lots of positive reinforcement and slow introductions your dog will start understanding that chickens aren’t playthings.

Be consistent and firm but never harsh with your dog. Repeat commands and reward your dog immediately when it obeys. If for example your dog likes to bark at the chickens, tell it to ‘sit’ and ‘stay’ in front of the chickens. Then slowly start giving its reward in increasing lengths of time after the command but before it barks. With time your dog should know that barking is an unwanted behavior.

Which Dog Breeds Get Along with Chickens the Best?

Dogs that are known as livestock guardian dogs (LGDs) are generally the best that get along with chickens. These breeds are specifically bred to be around livestock like chickens and protect them. They see it as their duty to watch over the chickens so you shouldn’t have much trouble introducing these dogs to your chickens.

LGDs that do great with chickens are the Anatolian Shepherd, Great Pyrenees, Kangal Dog, Kuvasz, Akbash, and Old English Sheepdog.

Dogs that are not the greatest with chickens are those with high prey drives. These include German Shepherds and Siberian Huskies. Though it will take extra time and work, they can still eventually have a good relationship with chickens with proper training.

Dogs can get along with chickens. It just takes a slow introduction, basic obedience, time and patience. Nevertheless, both the chickens and dogs should have their own space where they can get a break from each other.

Some dogs such as LGDs are better suited for chickens as they were bred to guard the chickens, but any dog can get acclimated to the chickens in your yard.

Sometimes dogs might be nervous around chickens while others might want to play with them and chase them around. How a dog reacts to a chicken depends a lot on their temperament and prey drive. Dogs with high prey drives are more likely to chase after chickens than a mellow one.

Disclaimer: This information is to be used as suggestions only and not to be used as a substitute for working with a dog trainer or vet for introducing dogs to chickens. Scratch and Peck Feeds is not liable for any injury or death resulting from a dog/chicken introduction. Always consult a trained professional for any action involving multiple species being introduced.